This is not the first time that Giuseppe Penone and Richard Long have shown together, either as a pair or as part of a larger group. While they showed as a pair at Tucci Russo’s gallery in Turin in 2007 and, again, in May 2011, their history of collective shows is extremely lengthy, its penultimate version, prior to this exhibition in London, being the sixth edition of Arte in memoria, at the synagogue of Ostia Antica in January 2011. The headway was in 1969, in the pages of Arte povera, edited by Germano Celant. Alongside leading figures from the homonymous group, founded in Genoa two years prior, there were also such American conceptual artists as Douglas Huebler, Robert Barry, Lawrence Weiner, Joseph Kosuth and Hans Haacke, the artists of the Land Art movement Richard Long, Robert Smithson, Walter De Maria, Michael Heizer and Jan Dibbets and the process artists Robert Morris, Eva Hesse, Richard Serra and Bruce Nauman. An international group, tried and tested in a frenetic succession of shows in a handful of years: Prospekt 69 in Dusseldorf and, also in 1969, Konzeption-Conception. Dokumentation einer heutinger Kunstrichtung in Leverkusen; the following year Processi di pensiero visualizzati in Lucerne, Conceptual Art Arte Povera Land Art in Turin, Information at the MoMA in New York and Between Man and Matter, when Penone first set foot in Japan. And this only to mention the most well-known exhibitions. For the first time during the post-war period, the rivalry between Paris and New York, between Europe and America, gave way to dialogue. This explains the absence from this assembly of the Pop artists, who landed in number and with the attitude of colonisers at the 1964 Venice Biennale. During these exhibitions, on these pages, the confrontation was equal, devoid of ideological, linguistic or national barriers. There was a desire, Penone confirms, “to work as universally as possible, detached from a specific culture”[1], a work “not of exclusion but of inclusion”[2], comprehensible to all, far from the elitist idea of the avant-garde. This resulted in the use of “poor” materials, a refusal of the market, the search for unconventional spaces and the reference to megalithic and prehistoric culture, whose foundations, based on simple and primary forms, spoke to everyone. The same culture, if we look carefully, that inspires both Penone and Long. Observing their work, on display in London, we are better able to capture affinities and differences.
Celant’s publication reflected the same climate: the critic retreated in good order to the second ranks; he accompanied the work of the artist, rather than investigating it; he chronicled a fluid state, in continuous development. Rigorously black and white, the publication alternates images and statements by the artists.
Those pages mark Penone’s first public appearance as the mascot of the arte povera squad. Born in 1947, he was 22 years younger than Mario Merz, 14 less than Michelangelo Pistoletto, 13 less than Giovanni Anselmo, 11 less than Jannis Kounellis and Luciano Fabro, 7 less than Alighiero and Boetti and Giulio Paolini, 5 less than Piero Gilardi, 4 less than Emilio Prini and 3 less than Gilberto Zorio. Precisely with the latter he developed a profound and lasting friendship at the Accademia di Belle Arti in Turin, where Penone enrolled in 1966, after completing his diploma in accounting. “The idea of the tabula rasa was in the air at the time, the idea of starting over from zero, to construct something free of compromises with the past”[3]. In the field of aesthetics, as well as that of politics and society, through the cancellation of hierarchies and privileges. “The desire for an equal rapport between myself and objects is the origin of my work”[4]. Or: “My work began in the second half of the 1960s, during a moment of strong reactions to the political and social system that made no allowance for indifference. This tough social criticism accompanied the desire for a resetting of values, in order to rebuild atop the foundations of a renewed identity. The choice to work with natural elements is the logical consequence of an idea that excluded the product of society and sought relations of affinity with matter”[5]. For Penone starting over from zero meant beginning with what he knew: that luxuriant nature of the sites of his childhood, in Garessio, his agricultural roots, the rows of vineyards and fields of potatoes and wheat cultivated by his ancestors. With the idea of reducing the sculptural gesture to exemplary actions, “minimal, animal, automatic, primary […] leaving the imagination to work on things apparently of little interest”[6]. The result is the six works-actions from 1968 entitled Alpi Marittime (Maritime Alps), published in Celant’s book and a headway to the London exhibition.

A telescope of light

Pelle di grafite (Graphite Skin) from 2005, on display today in London, can be tied back to Svolgere la propria pelle. It is the imprint of the skin, though projected on black paper and drawn with graphite. Black drawings of differing dimensions, some small, others at the scale of the room, that only when seen up close and under the correct light reveal that we are not dealing with monochromes, but rather with spider’s webs of lines rendered pearlescent and luminescent by graphite; flashes of vortexes and overlaps, landscapes, the bark of trees. For this reason, each title is accompanied by the specific name of a mineral: reflection of galena; reflection of quartz… of sapphirine, of zircon… The drawings, Penone explains, imply the idea of the universe, of the relationship we perceive when our eyes are closed, far from perceptive vision, between the human body and reality, in all of its points, at 360°. “With our eyes closed our contact with the external world is limited to the envelope. With our eyes open, the identity of our envelope reaches as far as we are able to see”[45], thus reiterating the primacy of “tactile values”. Why graphite? It is a mineral, translucid like wax, like the oil left by our skin after contact. Applied to a black surface, it functions as its negative, that is as light and reflection. “The black sign of graphite draws the surface; continuing the drawing in the search for an ever greater precision we erase the drawing and, in the confusion of signs, we end up with an image reflected in the mirror of graphite […] The more we delineate, describe and tell a story and define the reality of the subject the more we cancel its representation obtaining the reflection of reality. The reflection overturns the real as the imprint of a contact. The surface that defines the contact of our body with the real is the skin. The drawing of the skin, a skin of graphite”[46].
The same pattern of lines, though more legible because it is etched into marble, can be found in Pelle del vento (Skin of the Wind) from 2005: “Stone awaits vegetal movements. It is like a fragment of the sea. It has the same visual value as water that includes the rocky shore and laps against the coast though unlike the sea it is she [stone – TN] that is gradually wrapped by the fluid and slow expansion of the vegetal”, Penone comments[47].
In Grand-Hornu, as in London, the eight black drawings of Pelle di grafite wrap around the room. How can we not think of the laic sanctuary of the octagonal chapel in Houston, designed by Philip Johnson, though known as the Rothko Chapel? Between 1964 and the following three years, the great expressionist-abstract painter Mark Rothko painted three gigantic triptychs, one with a shaped profile, and five individual paintings, all dedicated to the Passion of Christ, and all realised in black and brown: so majestic and solemn as to nullify the architectural container. Like Penone’s drawings, only light and a mobile point of view allow one to capture the infinite nuances of a black that is only apparently uniform and homogenous.

The perspective of the imprint 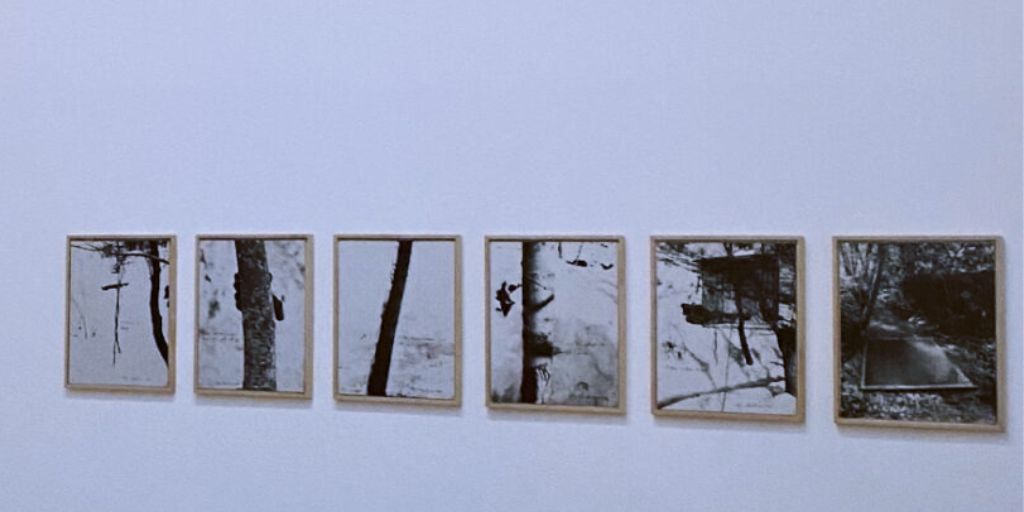